I haven't spoken much in the past about my religious ideology. It's always about politics, but I can no loner deny the simple but persistent Word of God. There is something happening that I can not explain other than to say that I have had this persistent message from the Lord that each of you need to hear, and there's someone reading this that needs to hear it. So, here is what He is saying to me.

"Stop them (religious leadership) from speaking. Interrupt them. They will come before me and I will not hear them, for they have been warned. They have led my flock astray and this is the unpardonable sin. Man changes, but I do not. I am Elohim, the Alpha and the Omega. I have guided you for thousands of years, yet now you turn your back on my teachings, and my Word. Correct yourselves and I will pour out my Spirit"

The "unpardonable sin" to which He is referring is that found in Exodus 20:7 - "Thou shalt not take the name of the LORD thy God in vain; for the LORD will not hold him guiltless that taketh his name in vain." Many over the years have taken this reference to mean that you cannot curse or say bad words that include God's name. But, In Mathew 12 Jesus says, “Truly I tell you, people can be forgiven all their sins and every slander they utter”, but continues and specifies the unpardonable sin is the "blasphemy of the Holy Spirit". Using "His name in vain", is standing in a pulpit with authority, saying that God told me to tell you something that He did not, and intentionally leading people astray. We could certainly discuss all of the intricacies and finer points, but for the purpose of what He has been telling me, this is the meaning He is providing. I do not write this article lightly, because I could be subject to the very thing He is speaking out against here.

I won't take the time to get into depth about my religious past or the things I've been through, but I've been more fortunate than most to have strongly felt the power of God early in my life, but have also turned my back on the the miracles I've seen in order to pursue a more "scientific" approach to the "unknown things" that I have experienced in my life (which is much worse). I'm certainly no Saint. I am a sinner. I do not go to church anymore. I do not regularly pray to God or meditate on Him.So, hearing from Him again, especially so intensely, was quite a surprise!

As I understand it these many years later, it seems that the power of God disappeared for many people. As a teenager, I experienced many wonderful gifts. But, then, like many others, I found that the presence of God disappeared, and for me, pure evil took it's place. For others I have spoken to, they have experienced an absence of His presence. I thought it was only me. I thought that I had done something wrong. I abandoned the church, for many reasons. For decades, I thought that I had let Him down. As the years persisted, I saw the church(s) devolve into a sanctimonious oligarch of corruption, greed, and abuse, only solidifying my worst expectations of man, and the fallibility that exists in each of them. Every man is fallible, and when placed on an alter for all to worship, crumbles under his own arrogance.

For this reason, among others, I've never understood how people can put so much faith into a single fallible person. At least with Protestant faith, your relationship with Christ does not depend on another person. There's no intermediary needed. I've always been troubled with the pedestal of faith and power that we place man on, but especially the Catholic faith. That so much faith could be placed in one man, as opposed to your own personal relationship with Christ. I do not feel like this Pope is of God. I'm not just picking on Catholics, or the Pope, I've got plenty to spread around to everyone. I believe that God has something to say, to all of us. I would rather not have anything to do with this topic at all, much less quoting God. This frightens me on a level you might not comprehend.

I feel like God is especially upset with the Pope of the Catholic church because of the authority he wields, but by no means is His anger solely focused on him. He is equally upset with protestants across the board. I don't know why He chose me to tell this story. I only believe that it's "confirmation" for someone in a more authoritative position to do something about it. I can only tell you this, whether you believe me or not, He spent the entire day with me going over this topic. It's difficult to try to consolidate all of this into an "article" or a couple of quotes. I've done my best to try to provide the "cliff notes" version and comply with His wishes. Since I do not go to church anymore, I do not know who to "interrupt" or stop from speaking. I can only comply using the resources I have. I believe this message is for others.

This conversation with God came as if I were writing a letter to a Pastor, that I did not know, in a church that I had not been in, and I was supposed to deliver this letter to him. I was patiently waiting for the end of his sermon, then, God made me stand up and interrupt the preacher and read these words aloud BEFORE he continued. The inference was that the speaker was about to deliver information that was false, and that the interruption was an opportunity for him to reconsider his words before he committed the "unpardonable sin". A warning, but also an opportunity. I suppose the letter he wanted me to write is this one. Whether it is delivered directly to a pastor, preacher, or the Pope himself, well, I suppose that will be up to Him.

I've tried to ignore this to no avail. I've reached out to friends I know that are faithful to Him, and have received many confirmations about this topic. It seems the switchboards are starting to light up again and something is about to happen in the church that is big! I have no idea why God persists on having me write an article about it, but if you know God then you know that he will drive you crazy until you do what He asks. What I do know is that if religious leaders come back to him that he will pour out His Spirit like never before. He wants to do this, but he wont if leadership continues to defy Him, His word, and His teachings. If this message has been a confirmation for what God has been impressing on you, then please share this message with your family and friends, so hopefully whomever needs to hear it does!

"They will come before me and I will not hear them, for they have been warned. They have led my flock astray and this is the unpardonable sin. Man changes, but I do not. I am Elohim, the Alpha and the Omega. I have guided you for thousands of years, yet now you turn your back on my teachings, and my Word. Correct yourselves and I will pour out my Spirit" 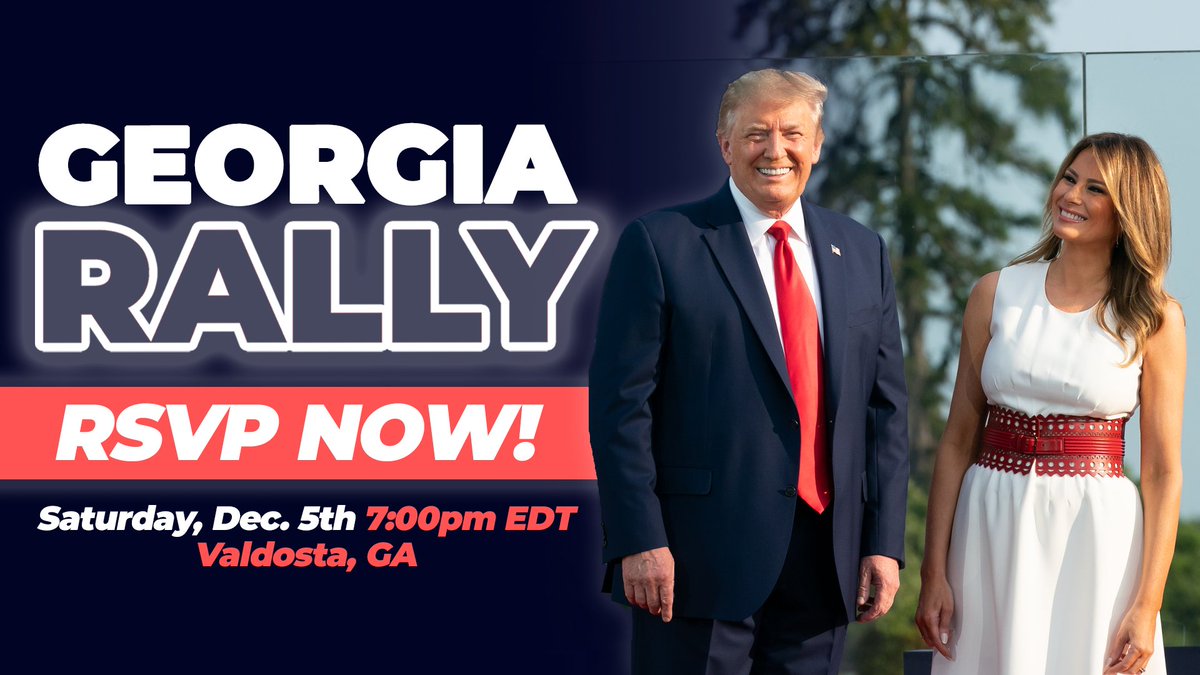 Team Trump @TeamTrump
President @realDonaldTrump and @FLOTUS will be in Georgia TOMORROW!