See the latest on New Zealand here as they have started gun confiscation with the passes of some new laws (04/10/19)!

Here's what we know about the mosque shootings so far

49 people have been killed and 42 wounded in mass shootings at two mosques in Christchurch, New Zealand. 30 + were killed at a mosque on Dean's Ave, and another 10+ at a mosque on Lindwood Ave.

Four people were originally detained by police. Three people remain in custody in connection to the shootings, police confirm.

(AP) — A senior Turkish official says the suspect arrested in the New Zealand mosque attack travelled to Turkey multiple times and spent what the official called an “extended period of time in the country.

Who is the New Zealand Mosque shooter?

We also know that the shooter, 28 year old Australian native, Benton Tarrant has been charged with murder. The two other held have not yet been charged with any crimes. 2 explosive devices were found in nearby vehicles.

The politics of it all

There are big elections coming up in New Zealand. The infamous John Podesta was reportedly in NZ just a few days prior to this event. It's no surprise that New Zealand's Prime Minister has used the fresh emotions of this event to do exactly what the shooter wanted; "gun control".

We see this time and time, and time again. There is a shooting and immediately those on the left try to capitalize, in coordinated fashion, on the fresh emotions of the people without waiting for real facts to come out.

One frightening thing we have found after such events, is that the suspects social media profiles are immediately shut down, and all sources of information controlled. We understand the importance of gathering as much evidence as possible immediately after to such and event in able to preserve it for the historical record.

Shutting down social media, cutting off public access to evidence, and controlling the narrative

But, the feds having gotten very quick at doing this. Since the Las Vegas incident, we have seen a virtual immediacy in the shutting down of online profiles, making it difficult for anyone to gather any information.

We have used such evidence, as others have, to discredit the mainstream media's leftist narrative repeatedly. As we have seen in the past, everyone jumps on the bandwagon condemning conservatives and "white nationalists" only to later find out that it was a leftist in disguise.

Other cases of hate crimes, like Jussie Smollett, and others, have been proven repeatedly to be black perpetrators, not "white nationalists". Aside from the Smollett case, you typically don't see the corrections to their original stories, which serves to perpetuate a narrative that doesn't exist.

Of course, that's not to say that there is no hate in America. There is. On both sides. But, the media endeavors to perpetrate a narrative that there is a "systemic problem" and it all has to do with "White Nationalists", because if you are white and you love your country, then you must be a racist. You know that story.

This is yet another. It took only seconds for this horrific event in New Zealand to be blamed on "white nationalism", which has become synonymous and interchangeable with "white supremacy", in the United Sates and it's all Trump's fault.

As you can see above, New Zealand's Prime Minister jumped on it quickly, in apparent evidence of her current political proposals for her upcoming election. The Australian Prime Minister called it "extremist right-wing". All of this before any real investigation had been done.

But, of course, because these government's shut down all of the offender's social media, so I guess we'll just have to take their word for it, right?

Invoking the need to stop the spread of "hate" they shut you off from being able to see these people for who they are, for yourself. That also opens the door for them to control the narrative and call those who oppose that narrative "conspiracy theorists".

Conspiracy theorists are created from a lack of transparency by our governments. This can be a problem. But, that is why the preservation and discrimination of evidence is so important and why we fought so hard to keep the full video and manifesto available for you to see for yourself.

About the manifesto and motivations

Self-proclaimed "eco-terrorist" unleashed hell on a New Zealand Mosque in order to affect gun laws in the U.S. He also says the country that most closely holds his values is China, and calls himself an "Eco-Fascist".

We've been going through the "Manifesto".  A link to the full manifesto available below.

For now, here are a few screenshots of some of the highlights we have found so far and the full video & manifesto link below.

Above is the link to the full manifesto of Brenton Tarrant.

This guy is clearly not part of any Trump movement. He's clearly a leftist that, as he states, wishes to effect civil war in the United States so that gun confiscation will be enacted. It took only moments for the the Prime Minister of New Zealand to follow the shooter's orders.

Who benefits the most from a divided nation at war in the U.S.? Our enemies around the world do, as well as globalists, often one and the same. It's been proven time and again that other nations have interfered to cause chaos.

The 2016 election interference by Russia was not to support one candidate over another. As intel chiefs testified before Congress, Russian actors bought ads on Facebook for both sides, and that their goal is to keep causing chaos. This makes it difficult to operate and be effective, and a civil war could bring their biggest economic competitor to it's knees.

So, the next time you hear about one of these events, just remember there's always more to the story, and jumping to any emotional conclusion is always premature and generally wrong.

Think about who it is that has the most to gain. Remember, as I always say, you must find the motivations of people in order to understand the situation. The motivation here is certainly NOT to promote "white supremacy" or "white nationalism", it's quite the opposite.

Full Video of the shooting

Full video of NZ shooter below. We have provided an embedded option and a link to another site as a backup.You can start at the 6:00 minute mark. Back up if you want to see the drive to the mosque. It only includes the shooting at the first mosque, and apparently, his battery runs down on the way to the second.

I do want to caution you as to the graphic nature of this content. This is in no way a celebration of this type of activity, but this site believes in providing you, the reader, with all the information and evidence that we can, so that you, the reader can make up your own mind.

This video is in no way a promotion of such conduct, but it is "newsworthy", and in our opinion, should be available to us in that regard.

To view the video of the 1st person "Eco-Terrorist" unleashing hell on the mosque in New Zealand, Click the link below as an alternate in case the embedded video at the bottom does not work.

There is a "content warning" on the video and you must click on the "watch video" button.

The latest is that New Zealand moved quickly to begin gun confiscation.

ISIS claimed responsibility for Easter Sunday Attacks in Sri Lanka as retribution for the Christchurch, NZ attacks. We have a comprehensive, 3 part, report on the Sri Lanka attacks, plus more information and sources for Muslim attacks on Christians around the world. Includes multiple sources, social media, pictures and video. See below.

Terror Strikes Churches in Sri-Lanka on Easter Sunday; Includes Story, The Attacks In Pictures, & Other Sources

Sri Lanka Part 2; The Aftermath of the Easter Sunday Bombings 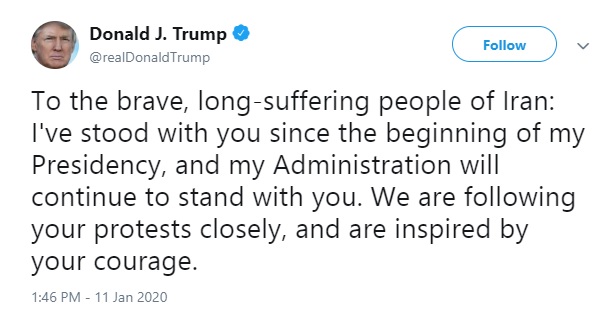 Donald J. Trump @realDonaldTrump
2 hours ago
The noble people of Iran—who love America—deserve a government that's more interested in helping them achieve their dreams than killing them for demanding respect. Instead of leading Iran toward ruin, its leaders should abandon terror and Make Iran Great Again! https://t.co/RLjGsC5WLc
View on Twitter

Donald J. Trump @realDonaldTrump
2 hours ago
The so-called “Supreme Leader” of Iran, who has not been so Supreme lately, had some nasty things to say about the United States and Europe. Their economy is crashing, and their people are suffering. He should be very careful with his words!
View on Twitter
15154
63270

Extinction By Taxation; What guns and cigarettes have in common